Instead of the usual “Big Lunch” which Catherington Village Residents Association (CVRA) has been holding for some years, this year they held a celebration to honour the Queen’s 90th birthday.  It was a ticket only event that sold out weeks ahead of the big day. 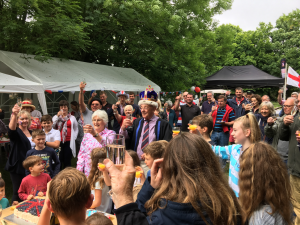 The party was held at The Farmer Inn, Catherington, in the donkey field alongside the pub.  Drinks were purchased from the pub.  CVRA would like to extend a huge thank you to Elaine the land lady who kindly allowed the premises to be used.  The field was lined by Gazebos/Marquees decorated with bunting, flags and balloons which were red, white and blue. The tables were decorated with flowers and covered in red, white and blue cloths.

The festivities included: Live Music by the Igloo band, who played a range of music providing ambience for the party. There was a delicious Hog Roast, supplying food for everyone, some people even had second helpings!  Catherington WI worked hard on the morning of the event to provide freshly baked scones with jam and clotted cream – thank you they were superb. A huge cake kindly made by the daughter of one resident was decorated as a Union Jack with blueberries and raspberries – this was excellent thank you.

The activities ran throughout the afternoon, keeping the one hundred and fifty attendees amused.  There was a welcome Royal Quiz which tested the brain cells.  Children and Adults had Union Jack flags face painted on their faces -thank you to the local lady for volunteering to do this.  There was a competition for the best Crown.  The dress code was red white and blue -one person wore a brave red, white and blue striped suit which looked fabulous and caught the eye of everyone.  There was a bouncy castle which always works with children.  In addition to this a Royal Treasure Hunt for all ages had people searching around the field for clues, in the hope of finding treasure.  Set up at the back of the field, was a steam train for adults and children to ride up and down the width of the field – thank you to the owner for providing his hobby for everyone to enjoy.  The obligatory Catherington Tug of War had a new longer rope which allowed larger teams.  Catherington Lane beat the rest, in the best out of three rounds, which had everyone on the floor at one point!  A birthday card for HM Queen was signed by all the residents and will be posted to Her Majesty.  As if that wasn’t enough the children also played football and volleyball between other activities. 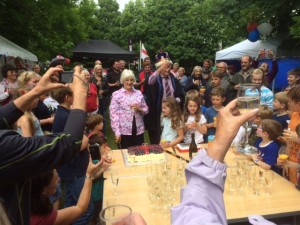 The party was concluded by a Prosecco toast, proposed to HM Queen by Mr Evershed one of the eldest residents of the village, a chorus of “Happy Birthday” and the cutting of the Union Jack cake by Mrs Evershed using their Naval sword that they used on their wedding day several years ago.

During the day a birthday card was circulating and everyone was able to sign and send their own birthday wishes. This was posted by Ann Taylor and this week she received a letter of thanks from Her Majesty. Here it is. 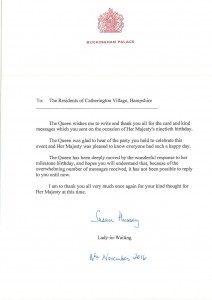 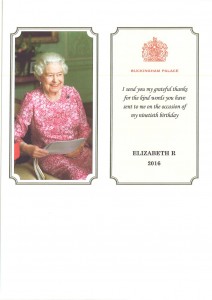