Catherington Queen Elizabeth II Time Capsule
Remarkably I have just been able to book a date in the diary of my SmartPhone for 10 am on Saturday, 11th October, 2092 reminding me to re-open the CVRA Time Capsule!
It was Bill Evershed’s idea that we celebrate the Queen’s reign with the capsule and leave it there for another 70 years. The weather was kind as we all gathered on 11th October 2022.
70 items, each representing a year of the Queen’s reign from 1952 to 2022. What would you include? Some items were very small: a farthing from 1954 with the Queen’s head on (they were only minted for two years of the Queen’s reign before being withdrawn); and some quite large: ironically the mini-skirt from the 1960s was one of the largest items included. All to be opened in 70 years’ time – 2092.
Children from Catherington Infants, Horndean Junior and Kingscourt School wrote letters to their 2092 counterparts and joined the event in the Recreation Ground. They also wrote their names on pebbles which were used to pack around the capsule once it was in the ground. And we were very lucky to be joined by Nigel Atkinson, Lord Lieutenant of Hampshire and now, the King’s representative. As well as telling us about his duties and what it was like working with the Queen, he also commented on the contents of the capsule, especially the Kipper Tie (also from the 60s).
Our hope is to install a memorial bench over the capsule and that some of the children present today may take part in the re-opening in 70 years’ time. Don’t forget to put it in your diaries! 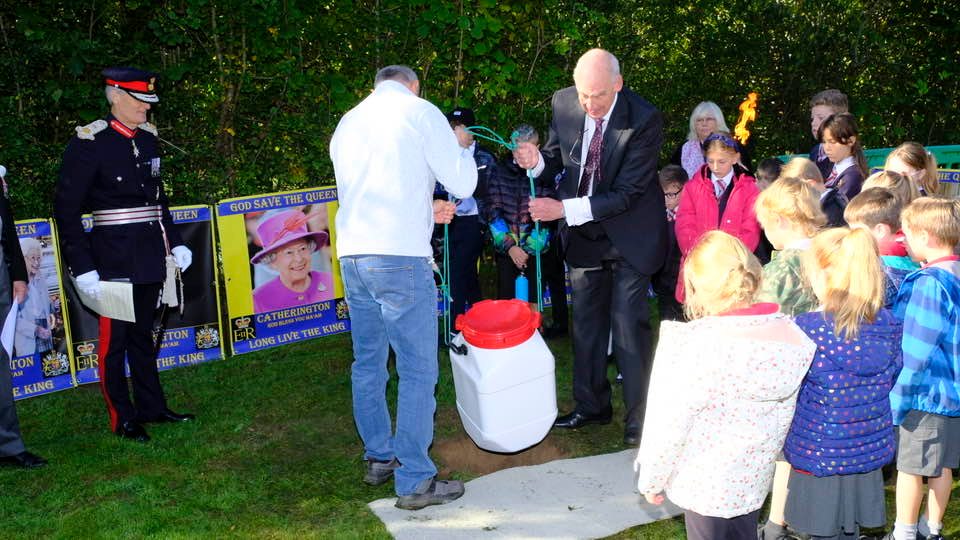 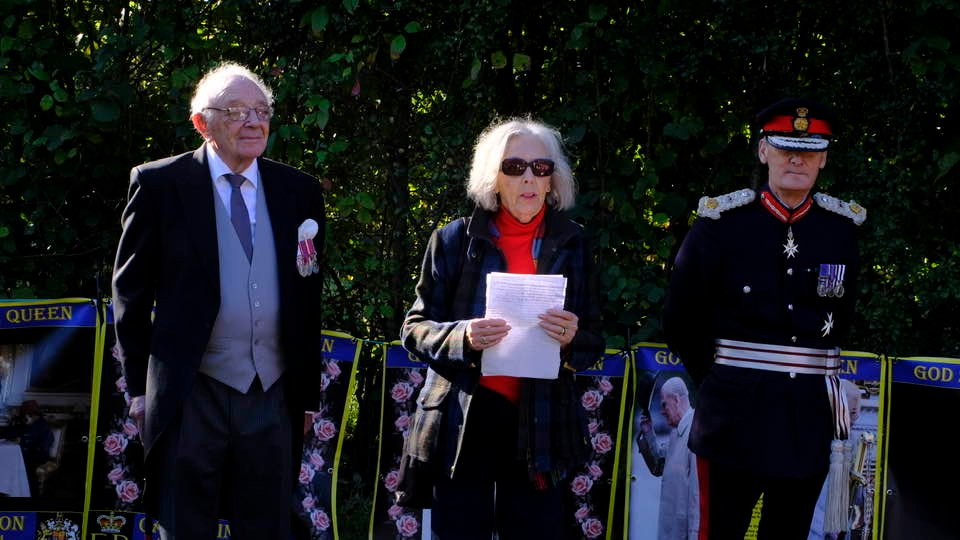 The Platinum Jubilee of HM Queen Elizabeth II
February 2022 marked the 70th Anniversary of the Accession of HM Queen Elizabeth II, the longest reigning Monarch in British History
In June, to celebrate her Platinum Jubilee, the whole Nation and Commonwealth set aside some four days of Pageantry, Parades, Church Services and
Concerts, focussed primarily upon London. However almost every City, Town, Village and Hamlet throughout the Country sought to mark the Occasion and Catherington, led by its CVRA, was no exception.
In preparation for this the CVRA had arranged for a dozen weather-proof placards with designs, mostly by local children, depicting scenes of the Queen’s life,
to be displayed the length of the village. And these were complemented by rows of red, white and blue bunting and, at nightfall, by strings of cascading small
lights.
At 7.45pm on Thursday 2nd June, the Anniversary of the Queen’s Coronation, the CVRA had organised a Thanksgiving Concert of popular music of songs from
the seven decades of the Queen’s Reign, and concluding with the National Anthem, to be held in All Saints Church where our community singing was led by
the cunningly punning titled ‘A-Choired Taste’. This was attended by Mark Thistlethwayte, Esq., one of HM’s Deputy Lords Lieutenant of Hampshire, who later
climbed the ladders within the Church Tower, spoke inspiringly from the summit to us all below in the Churchyard and then, at Sunset, ignited one of a giant
chain of fiery Beacons glowing throughout the Land to announce this Message of Celebration; just as in former times. A copy of his Address is covered
elsewhere on our Website. 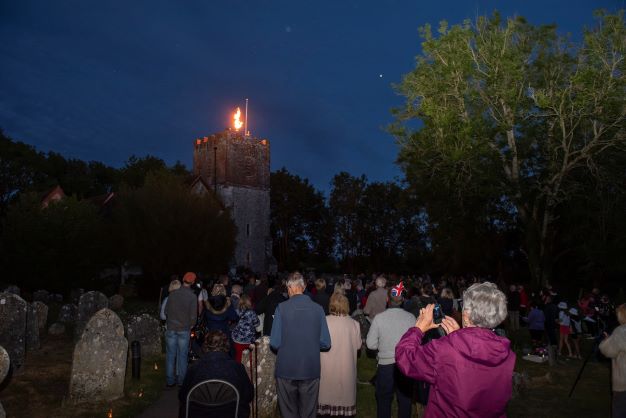 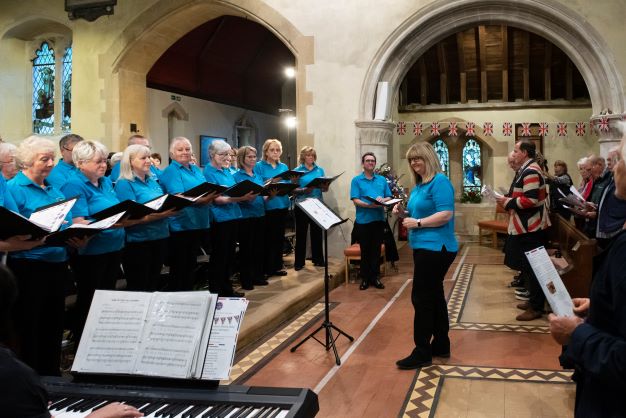 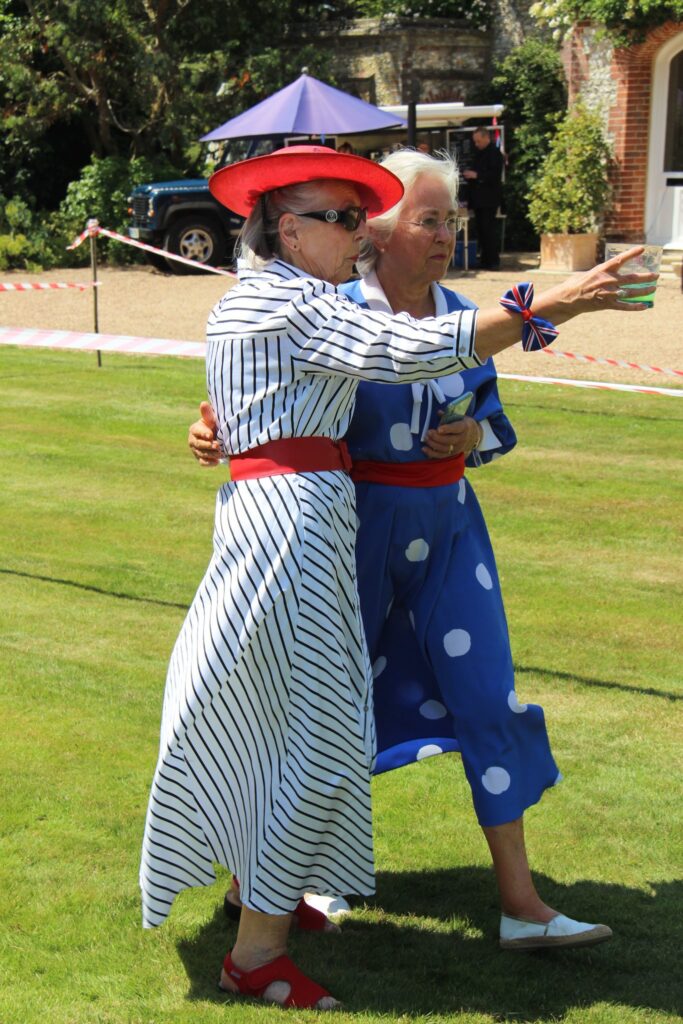 opened her flower-filled garden and lawns at St. Catherine’s, for
a Village Picnic. On a flagpole at her home flew the blue and yellow Flag of the Republic of Ukraine to mark British support for this beleaguered Nation
defending itself from Russian invasion.
At the picnic, we had all been invited to attend in ‘1950s Costumes’ and many of these seemed a good deal more attractive than 2020s fashions! We brought
our own rugs or folding chairs, food and wine, and settled in the warm sunshine to chat, imbibe and eat.

After lunch a whole series of Sports had been devised in which all ages seemed happily to participate – Sack Races, Egg-and-Spoon Races, Three-Legged
Races, Wheel-Barrow Races, Wheel-Chair
Races – culminating in Tugs-of-War; Boys v Girls, Old v Young; and Everyone v Everyone Else!
Then came the Cake, decorated with red, white and blue flagsand a glass of ‘fizz’ for the Loyal Toast.
And so we all trod our own homeward ways, sustained by each other and by the matchless example set to us by our Queen throughout the lifetimes of so many of us. 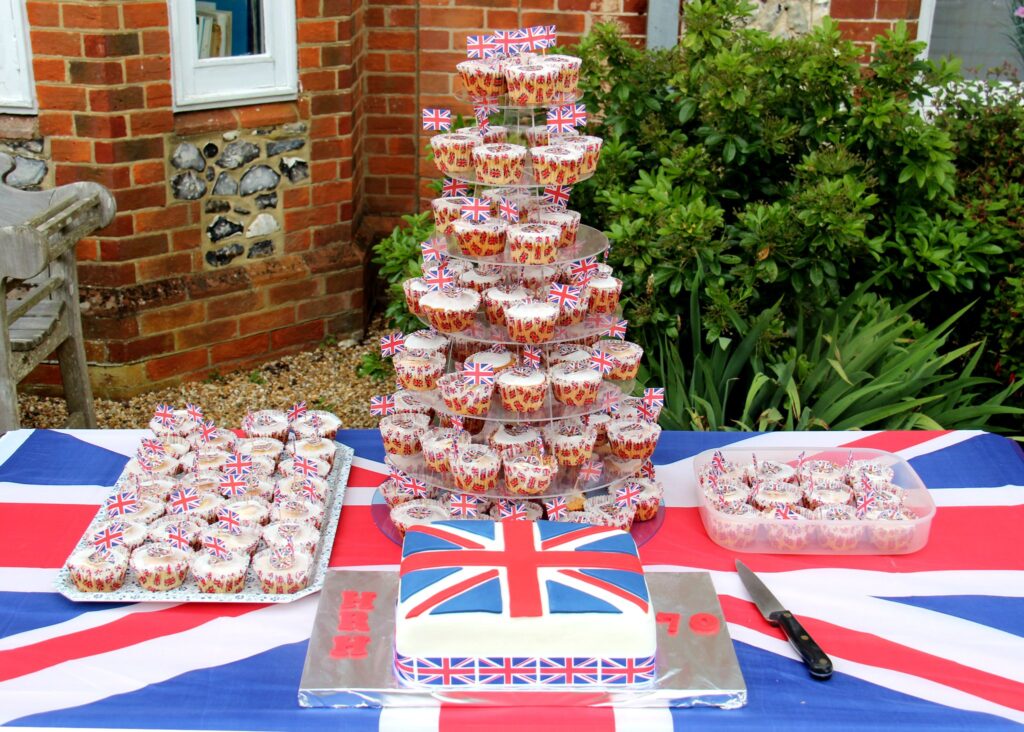 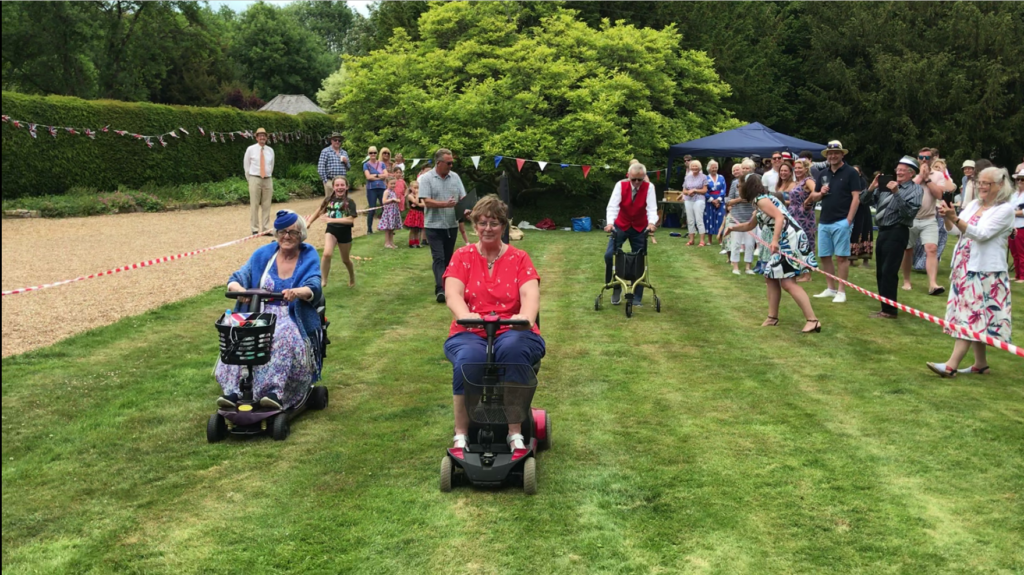